Italy might not be a country you normally think about when you want to spend your Christmas vacations abroad, yet there are some beautiful traditions, food and not, you might want to know if you choose Italy as your Christmas destination, so fasten your seat belt let’s start exploring them!

1) Christmas celebrations start on the 8th of December, a day called Immacolata Concezione (info). On this day, Italians decorate the Christmas tree – even though some are too impatient to wait and like to do it earlier to enjoy the tree a bit longer! The Christmas tree – l’albero di Natale or just l’albero – stays until the 6th of January.

2) Italians open their presents on Christmas Eve (Vigilia di Natale), after the cenone (lit. “big dinner”  – not so hard to imagine why it is called like that), when children wait till midnight for Babbo Natale (info) to come. Given the fact that children do not find their gifts on the morning of the 25th when they wake up, Italian parents have a hard time finding ways to make sure their little ones keep beleaving in Santa, so for example if you have a big family that gathers for Christmas, normally one relative misteriously disappears for a while – enough time to dress up like Santa, get the sack and bring the gifts to a room that is so crowded with loud children that no-one notices one person is missing!

3) Christmas celebrations end on the 6th of January, a day we call Epifania (info), indeed we say: “Epifania, tutte le feste porta via” (something like: Little Christmas takes away all festivities away).

When children wake up on the morning of the 6th, they find their stockings – la calza – filled with sweets that la Befana has brought. If they have been a bit naughty, they get carbone instead – a lump of coal – today an all-sugar candy with the shape of a black rock. My parents gave me carbone only once, but it did not work because that fascinating and sparkling piece of candy was the very first thing I took to eat and I enjoyed it so much that I’m not sure I did get the message – haha!

4) Schools normally stay closed from the 22nd of December to the 6th of January.

5) Apart from the Christmas tree, Italians decorate the presepe (info)– Nativity scene – and keep little Jesus’ statuine out of the grotto until the 24th at midnight, when the whole family gather around the presepe, add the statuine and do the segno della croce – sign of the cross – to celebrate the birth of Jesus.

The best presepe makers are in Naples, my native city, and they are located in a street called San Gregorio Armeno, in the historical centre. You will find small shops runned by artisans, most have been there for years or decades, with Christmas crib figurines of all sorts… mechanical or not, they go from low to higher prices according to how big or rich in details they are. Bear in mind that the area gets very packed in December, and it can be so crowded you can’t even walk. 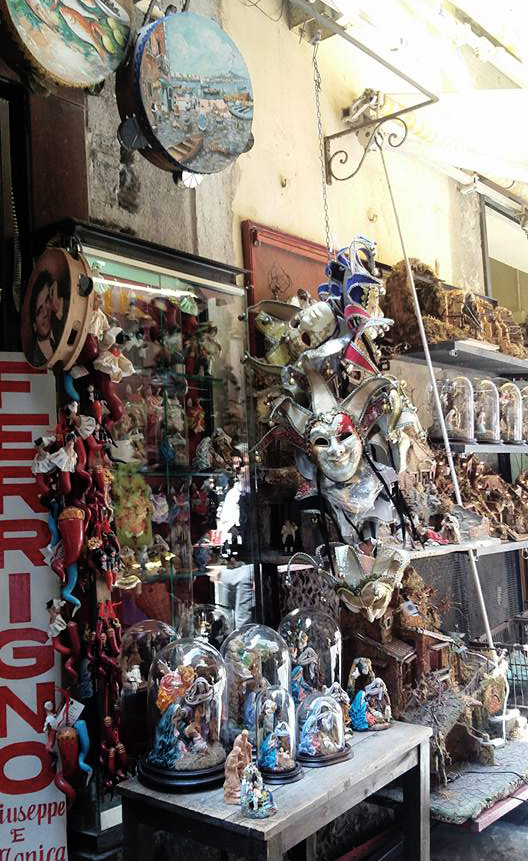 If interested, you can visit the Museo di San Martino that hosts a huge collection of crib figurines. I found the museum unusual and loved to see the handmade craft.

6) Despite the fact that singing on Christmas is a tradition introduced by St. Francis of Assisi – in fact now in modern days the Basilica in Assisi hosts a big concert for Christmas – carolling is not a big tradition in Italy, not as much as in Nordic countries.

7) Speaking of Tu Scendi Dalle Stelle, this song is played by bagpipes players – gli zampognari – throughout Northern and Central Italy. Not so much in the South, but it depends on the city and on the area where you live. The players are normally shepherds that sound during the year but move to the cities on Christmas time; they normally go in couples and can be found as crib figurines as well, especially in the Neapolitan nativity, next to Jesus’ grotto.

8) The Boxing Day, the 26th of December, is what we call Santo Stefano, St. Stephen’s Day. It is not the day we start the sale – which normally starts on the beginning of January – but a sort of second and less important Christmas Day: we say “Natale con i tuoi, Pasqua con chi vuoi” (Christmas Day with your family, Easter Day with your friends), so on the day after Christmas you get to see your friends and exchange gifts. Or just keep eating with some more relatives.

9) Christmas in Italy is probably a bit less commercial than in the USA or in the UK.

It is all about family and food, especially food. Indeed some shops shut for Christmas or stay open only half a day on Christmas Eve, but might be closed on Santo Stefano as well.

Each region has their own food traditions for Christmas: on Christmas Eve you normally eat meat in Northern Italy and fish in the South. In Naples, for example, the primo is normally spaghetti or paccheri with seafood and the secondo is a selection of fish that can include fried squids, octopus salad and similiar dishes. Italians book in advance the fish to their trusted fish seller in the market and then go early in the morning to get it to make sure they can prepare a high quality cenone. 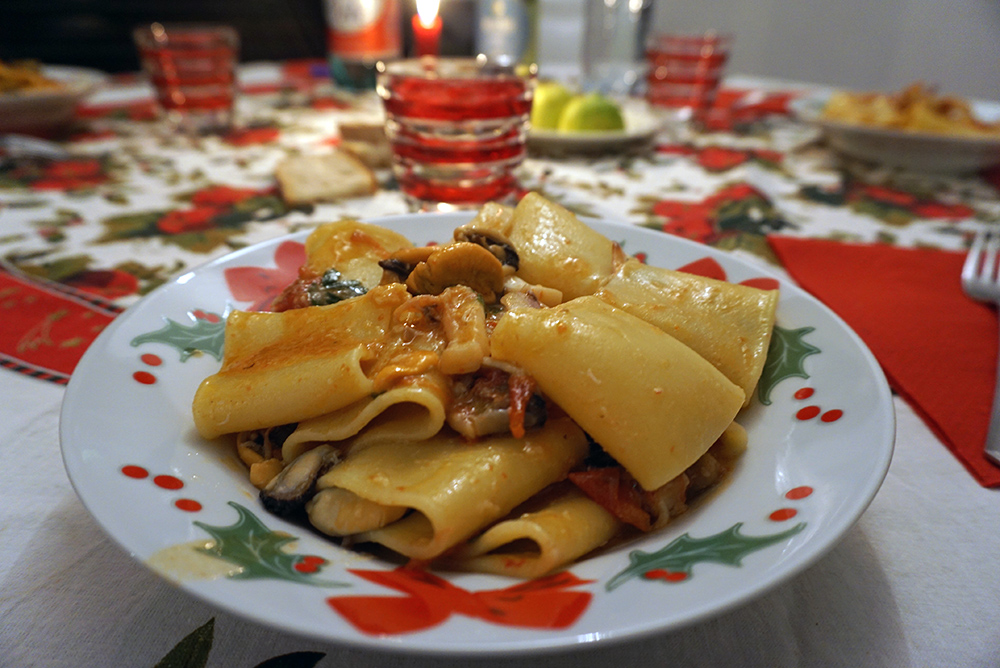 Most traditions refer to Christmas desserts. We have the well known Panettone, Pandoro, and Torrone – all three of them born in Northern Italy – but today I would like to introduce you to some others that might be less famous abroad but they are just as rich in taste and tempting.

In Naples we have Susamielli, S-shaped biscuits made of honey and some Christmas spices. 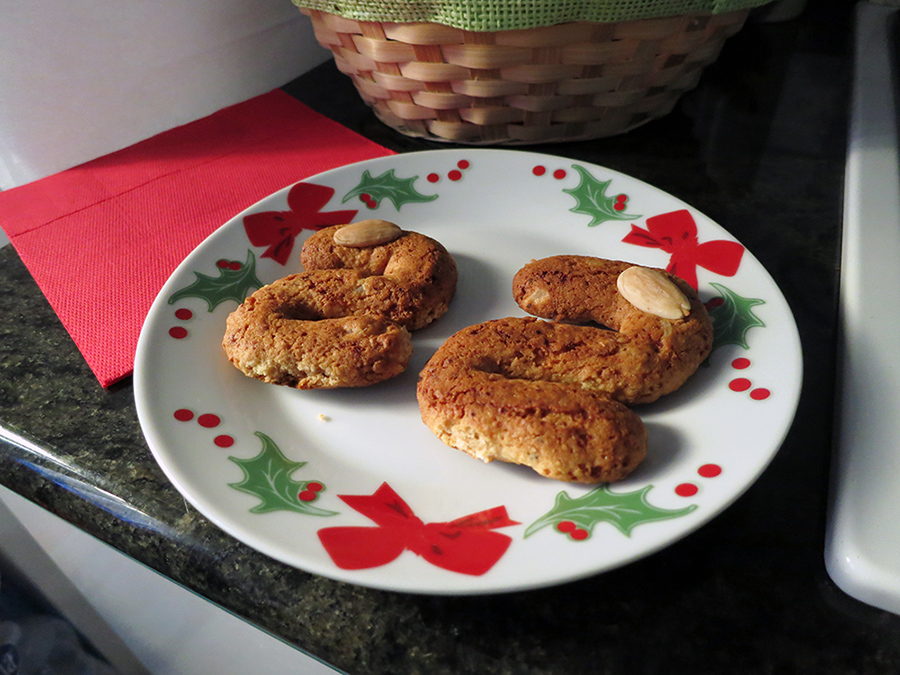 There’s another version that is even more difficult to bite, i Roccocò.

Another dish is Mustaccioli, pastries with the dough made of cocoa, almonds and Christmas spices, and covered with a glaze made of cocoa and sugar. I love them and like to prepare them every year. 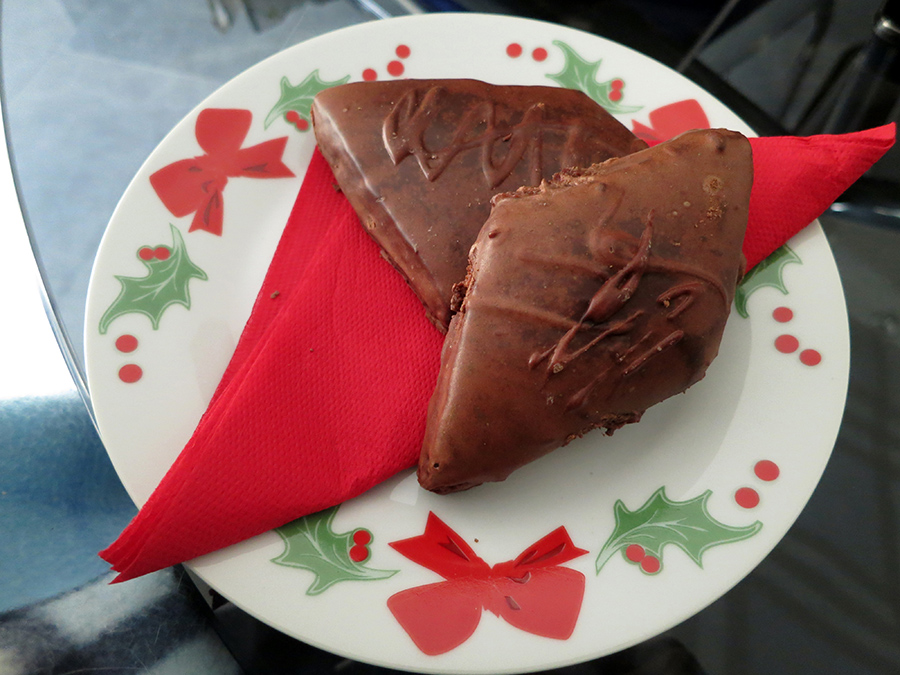 The queen of all festive cakes for Christmas is definitely La Cassata Siciliana, a cake that is typical of Sicily and that you can find throughout the year in Sicilian pasticcerie, pastries shops.

It is a Pan di Spagna – the Italian version of the Victoria sponge – filled with ricotta with chocolate chips, candied fruit, a hint of liqueur – normally the Liquore Strega -, covered in green marzipan, a sugar glaze and more candied fruit.

It takes two days to prepare it, but it is my favourite and to me it is not Christmas without a Cassata. 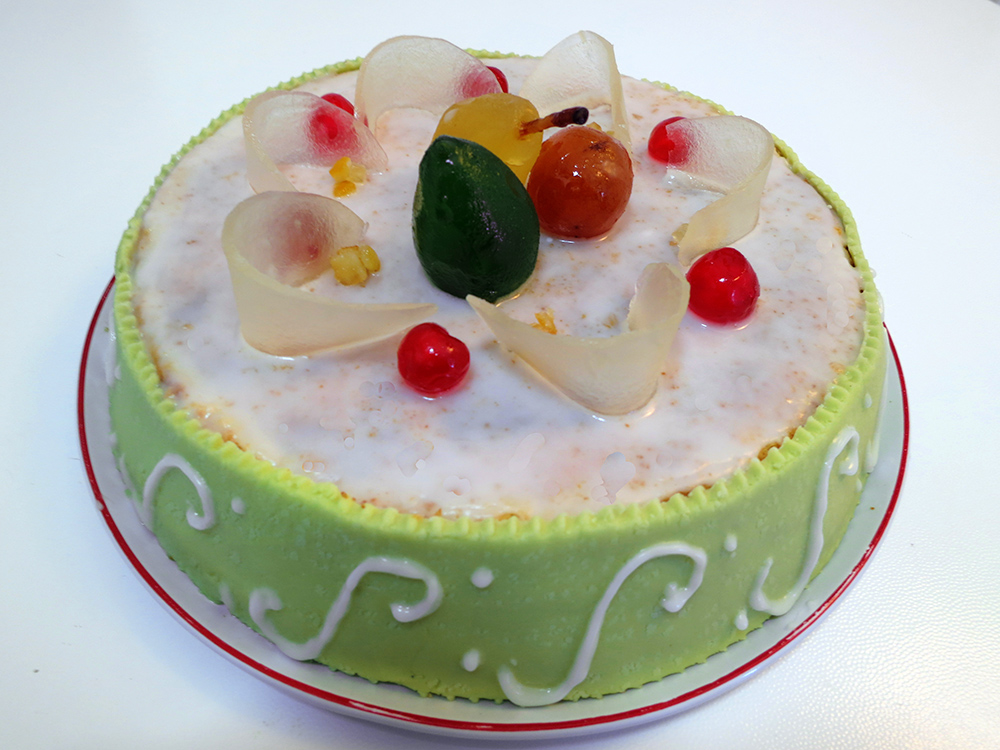 Last but not least, gli struffoli, a Neapolitan dessert made of deep fried balls of sweet dough, then covered in honey – flavoured with lemon and orange zest – and then with candied fruit and funfetti to decorate it.

It is a very festive and colourful dish that serves as a way to wish a happy new year: the many colours stand for happiness and the round shape of the balls reminds a coin, as a consequence it is also way to wish people to be rich in the new year. 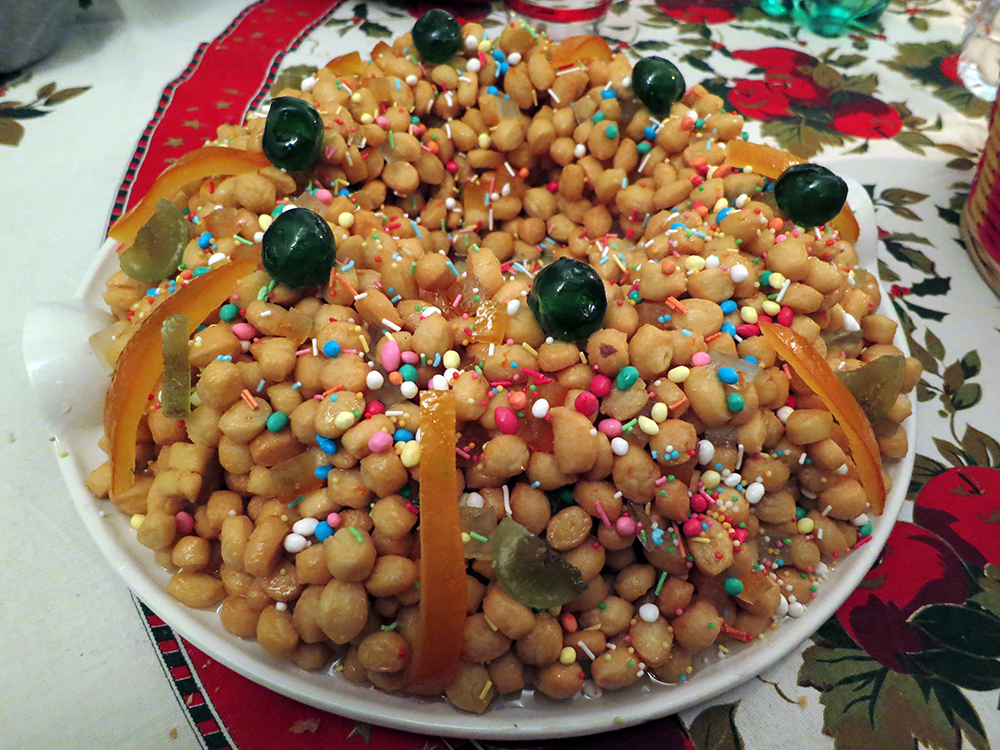 I hope by now you are familiar with the Italian Christmas traditions quite enough and that my post has been tempting enough to make you want to book your holidays straight away!

Check your knowledge with this quiz:

How To Translate “To Visit” In Italian

This website uses cookies to improve your experience while you navigate through the website. Out of these, the cookies that are categorized as necessary are stored on your browser as they are essential for the working of basic functionalities of the website. We also use third-party cookies that help us analyze and understand how you use this website. These cookies will be stored in your browser only with your consent. You also have the option to opt-out of these cookies. But opting out of some of these cookies may affect your browsing experience.
Necessary Always Enabled

Any cookies that may not be particularly necessary for the website to function and is used specifically to collect user personal data via analytics, ads, other embedded contents are termed as non-necessary cookies. It is mandatory to procure user consent prior to running these cookies on your website.